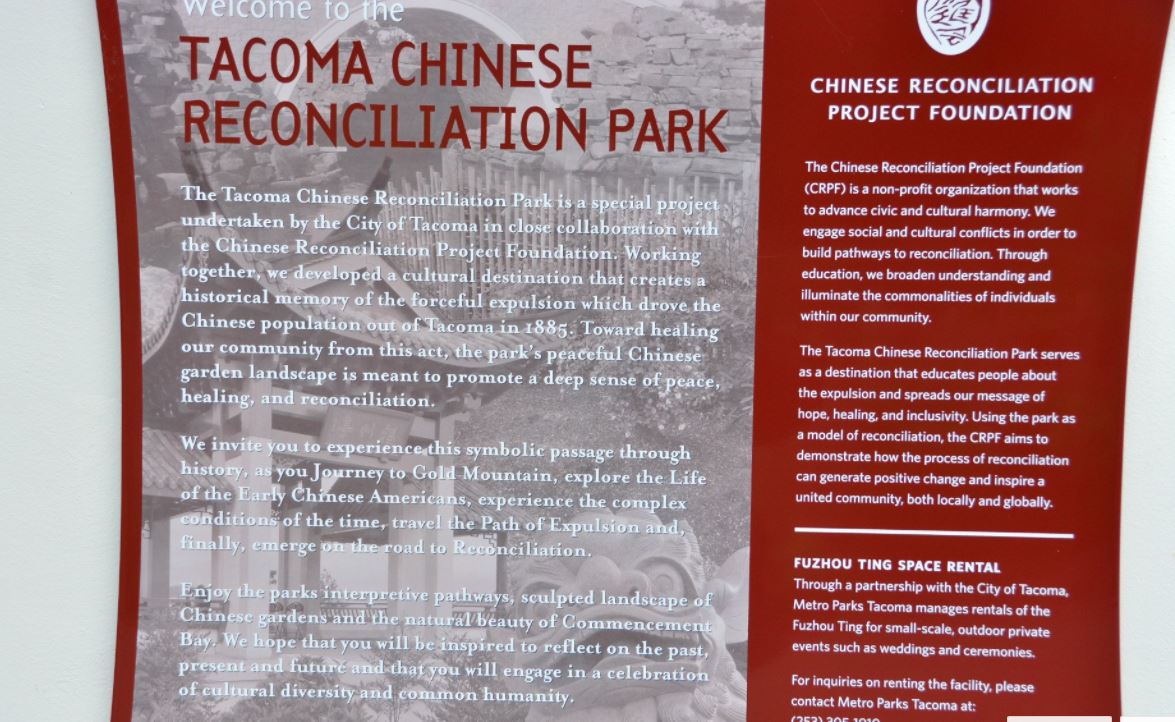 History of the Park – in Chinese

Initiation of the Park Project

Dr. David Murdock, in his submittal of the Citizen Suggestion Award Program application to the City of Tacoma on August 22, 1991, proposed that “since the eviction [of the Chinese populace] was from the Old Town waterfront, it would be appropriate to set aside an area of reconciliation (small park with a Chinese motif) and a monument acknowledging the incident, noting Tacoma’s regret and desire to move ahead in unity and respect.” On November 30, 1993, the Tacoma City Council passed Resolution No. 32415 to reconcile the historic tragedy of the Chinese expulsion in 1885, set aside the former National Guard site on Ruston Way for the “Chinese Commemorative Park and International Pavilion”, and authorize the expenditure of $25,000 for preliminary site plans, preliminary cost estimate and project programming for the project.

The park is located at 1741 N. Schuster Parkway, Tacoma, WA 98403. It lies at the eastern end of the Ruston Way Shoreline area, confined to the north by Commencement Bay, to the south by railroad tracks, to the west by the Jack Hyde Park, and to the east by the Tahoma Salt Marsh, which is a Natural Resource Damage Assessment (NRDA) project.

The 3.9-acre park site is part of the 7-acre site that was created in the late 1800’s for industrial purposes by filling with concrete debris, sawdust, dirt and other materials. It has approximately 1,100 lineal feet of shoreline on the Bay. A succession of various industries occupied this site leaving behind environmental contamination. In 1996-1997, the site was cleaned up and transferred to the City of Tacoma by the National Guard for public purposes.

The site is within a hundred feet of the site of a former lumber mill where many Chinese workers were employed in 1885 and within ½ mile of a former Chinese settlement called Little Canton. In 1885 the shoreline was located approximately where the existing railroad tracks run today and there was a raised roadway/wharf that was used by people to travel along the waterfront. Each day over 100 Chinese workers walked along the waterfront to their jobs. Yet their lives changed suddenly in the cold Northwest morning of November 3, 1885 as they were forced out of Tacoma and their homes burned down.

Today this beautiful waterfront property commands sweeping views and few indicators of the busy, smoke crusted, muddy, log and clipper ship dotted waterfront of 1885 and nothing remains of the settlement many Chinese workers called home, nothing that hints of the Chinese contribution or suffering. This will change with the completion of the park. 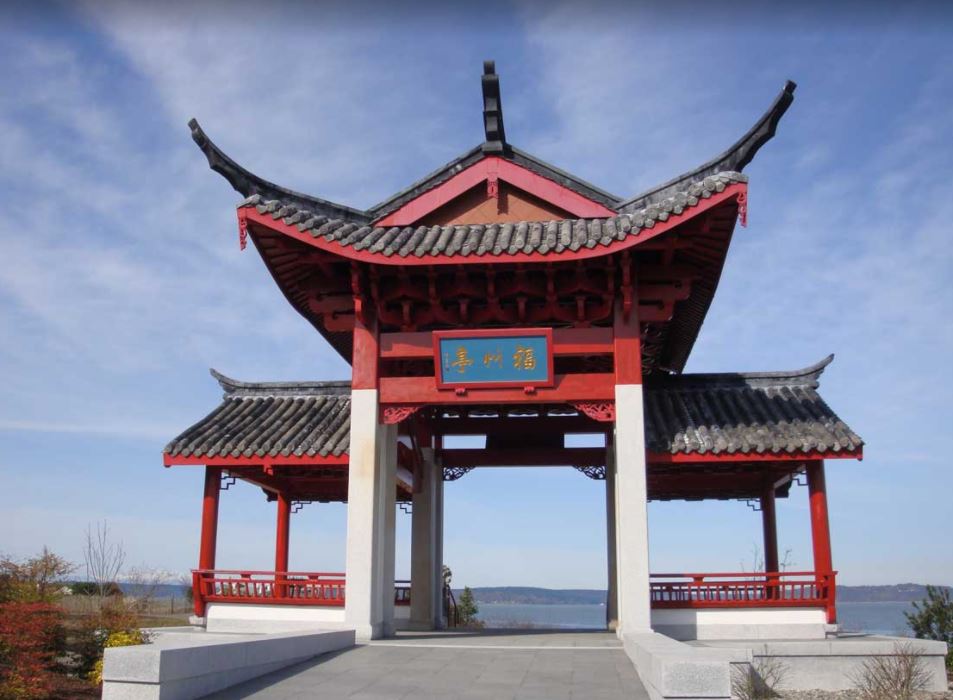 The design of the Chinese Reconciliation Park is a mixture of traditional Chinese garden and beautiful natural waterfront setting. The park design creates a variety of spaces carefully defined by walls, mounds, rockwork, landforms, interpretive displays, native and exotic plants found in Chinese gardens, pavilions and classrooms of a Chinese architectural style, and a fresh water pond that is approximately 6,000 square feet.

Since the site is long and narrow, visitors will enter from the far west end, so that the experience of the park unfolds as people move through the park from west to east, creating the illusion of a larger site. The story of the Sojourners’ journey to America, work and lifestyle, tragic expulsion, and opportunities for reconciliation are all explored within the context of the Chinese garden.

There are three features that are very unique to the site: the grotto, the trails, and the shoreline. The grotto is exquisitely designed to provide a functional and beautiful intertidal area, and with a Chinese bridge crossing over, will provide an excellent location for the public to view sea life including possible endangered species at certain times of the year. The waterfront trails are crushed rock, 10 to 20 feet in width, and continue the Ruston Way trails that presently end at Jack Hyde Park and provide pedestrian access to the site. The shoreline improvements include cleanup, protection and restoration, resulting in a seawall constructed on the westerly portion and a gently sloping cobble beach on the easterly portion.

The park design as illustrated in the current Master Site Plan was done in late 1990s by a team of landscape architects and planners led by the J. A. Brennan Associates.

Some reviews from TripAdvisor

This is a peaceful park to walk through and enjoy the beautiful views of the bay and port area, while contemplating a painful part of our history. It is nice to see us face up to the reality of what was done to the Chinese in this area and at least make an effort for some reconciliation with the memories on display here.

A Nice Place for Quiet Reflection

Walked past this park on the waterfront — it offered a nice, calm place to reflect and enjoy quiet sounds while watching the river traffic. It marks a dark period in US history — to make amends for the expulsion of Chinese immigrants from Tacoma in 1885. Worth a visit.

We went to Tacoma Chinese Reconciliation Park. Last time it was going through some reconstruction, so it was nice to see that done Its along the waterfront area of Tacoma.

Very well done explanation of a sad bit of history. The gardens area is simple but nice

Odd setting between the railway and the water and under an elevated highway but it’s worth looking for. The explanation of the 1885 expulsion of the Chinese from Tacoma is handled as tastefully as something like that could be described. The park itself is very nice and offers great views of the bay, distant mountains and downtown for photographers.

Learning experience for all

Having driven past the park several times, we found the entrance and stopped to investigate as the park looked very serene. It was a pleasant walk and offered great educational opportunities to enlighten all to the struggles endured by the Chinese who came seeking a better life. Very tranquil.

Truly a place of healing!

Tacoma’s Chinese Reconciliation Park is a beautiful anchor point to begin your journey along Tacoma’s waterfront District. Its a wonderful place to spend some time walking your dog, having a picnic lunch or sitting on one of its numerous benches reading a good book.

The views are spectacular from the harbor to the Olympics. Whether you go to watch the sunrise in the morning or the sunset in the evening it just doesn’t get more magnificent.

The Chinese Reconciliation Park is an anchor point that begins a nicely maintained walkway along the waterfront stretching for miles. You will pass by many wonderful restaurants with outdoor seating to quiet piers and parks with picnic tables to enjoy your bag lunch watching the sailboats dance with the big shipping barges.

The wide walkway allows for all sorts of people and pets to enjoy strolling along the waterfront. From groups of running mates to fathers jogging with a stroller. Dog walking girls or lovers holding hands and enjoying a little romantic walk. Whatever brings you to Tacoma this has been one of the best investments the City has made into revitalizing the city. Its wonderful places like this that make me proud to call Tacoma home.

Take some time to read the signs

The Chinese Reconciliation Park is on the shoreline of Commencement Bay. It was refurbished and the garden area expanded in September 2015. The park is intended to educate it’s visitors about a time when the Chinese of Tacoma were driven from the city by workers that believed the Chinese were taking their jobs. The park is recognition and apology for one of the numerous shameful things that Americans have done to minorities, None the less this is a very nice park and there is a great view of Commencement Bay

Quiet, romantic park on the water

On 3 November 1885 in a sordid act the city of Tacoma forcefully removed its Chinese population. The Chinese Reconciliation Park is a newly constructed and long overdue park which serves as a reminder and acknowledgement of that event. It’s a lovely spot on Puget Sound – quiet, serene and a wonderful place to watch the sunset over the Olympic Mountains. It’s not a huge park but wonderfully designed, with gravel paths, standing stones, grassy slopes, benches, bridges and of course the beach. At the eastern end is a Ting which was donated by the City of Fuzhou, China. All the materials came from Fuzhou and the Ting was completed in 2011. It’s a wonderful place to sit and read or visit with friends. There is a small parking lot underneath the overpass as well as many other parking spots along the waterfront and in Old Town. For a great afternoon pick a sunny day, go for a nice long walk along the waterfront and have a bite to eat along the way. Head for the Reconciliation Park in the late afternoon and enjoy the sunset. Wonderful!

Need a dentist in Tacoma? Click here for your Tacoma Dentist. We’re only 7 minutes away. 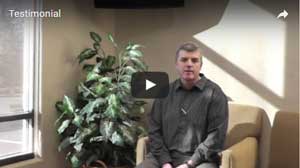 This testimonial video clip from Dr. Robertson will change your view on how important NON-EXTRACTION braces can help your TMJ, health and facial beauty